Elspet Gray died earlier this week aged 83. Best known for being the wife of the great farceur Brian Rix, Gray was a notable performer in her own right, remembered for her guest roles in Doctor Who and Fawlty Towers and for playing regular characters in Solo, The Black Adder and, of course, Tenko. As RAPWI officer Phyllis, Elspet appeared in eight episodes of the series playing a character who did her best to help the women to start to rebuild their lives after their ordeal in the camps.

Elspet enjoyed playing Phyllis very much and, despite her fast failing health, was determined to be present at last October’s cast reunion at the Imperial War Museum together with her husband Brian.

I reproduce here some excerpts from my book Remembering Tenko, for which she was interviewed last year, and to which she was very keen to contribute:

For the role of RAPWI Welfare Officer Phyllis Bristow, Summers and Riddington chose Scottish actress Elspet Gray. Gray remembers well the day she was interviewed for the part: ‘My agent had rung one morning and told me that Ken Riddington wanted to see me that afternoon. I didn’t think I had time as I had to take my eldest daughter Shelley, who had Down’s, for an appointment at Moorfields Hospital because her eyes were very bad, but my agent was insistent that I should go to Shepherds Bush afterwards. So I arrived very bad-tempered, having made no effort at all and this was clearly why I was cast as Phyllis! It wasn’t the greatest start.’ When it was confirmed that they wanted Elspet for the part and she heard it would involve five whole weeks’ filming in Singapore, she recalls: ‘I said: “What?!” and then: “How lovely!”’

Elspet was born in Inverness but brought up in India by Scottish parents: ‘My mother came from Elgin and my father from Peebles. He was working in India for Lloyds Bank and my mother was sent home to Scotland to have her first child. I was taken out to India when I was nine months old and my younger sister was born in Simla.’ Gray later returned to England until the time of Dunkirk at which point she returned to India. It was while being schooled at a convent in Srinagar that she appeared in her first plays: ‘I always played the male roles because of my height and I remember telling the Reverend Mother that I wanted to be an actress. “Glory be,” she said, “you’ll go to Hell!”’ But the young Elspet was undeterred, and when the Grays returned to England after the war, she went to RADA. During a performance of the play Hassan she was spotted by a talent scout and left drama school to appear in Robert Morley’s play Edward My Son in Leeds and London’s West End.

Gray subsequently enrolled in the Rank Charm School in 1948: ‘This really was a complete waste of time as far as the training was concerned, but we were paid £15 a week, which was a lot of money in those days and my mother was thrilled. All of us in the school were about 17 and trying to look 30.’ Nevertheless, this contract gave Elspet the chance to make several films for Rank that year, including The Blind Goddess, Fly Away Peter, Love in Waiting and Trottie True. The following year she married Brian Rix, who famously staged the play Reluctant Heroes on tour and at the Whitehall Theatre in which Gray also performed. Rix would go on to become the ‘King of Farce’ in theatre, film and television, often appearing without his trousers. In between having four children, Elspet maintained an acting career. As well as playing opposite her husband on stage and television (in forty separate farces), she took the roles of Lady Collingford in Catweazle (1970), Jackie Bronte in The Crezz (1976), Nancy Grenville in The Many Wives of Patrick (1976–78), Mrs Abbott in Fawlty Towers (1979), Felicity Kendal’s mother in Solo (1981–82), and Chancellor Thalia in Doctor Who: Arc of Infinity (1983). Her final TV role before Tenko was as the Queen to Brian Blessed’s King in The Black Adder (1982).

Despite her initial reluctance to be interviewed, Elspet was soon ‘thrilled to be playing Phyllis,’ liking the character very much and thinking it especially ‘interesting that Phyllis was taking a path in life that she probably hadn’t intended.’

Her memories of the Singapore filming and specifically of Jean Anderson were as follows:

‘When I began the filming in Singapore, I found that although the actresses were as close as the actual women in the camps would have been, they couldn’t have been more welcoming to me. It was a wonderful team to be working with.’ She also recalls a specific incident at this location: ‘It was a scorching hot day and Jean Anderson suddenly fainted and was picked up and sat down. It was towards the end of a very long day and I remember thinking: “Thank goodness, we can go back to the hotel then.” But ten minutes later, Jean was saying: “No, I’m fine. We’ll finish the sequence.” She was the most marvellous woman. Stalwart. I like to think it was the Scots in her.’ 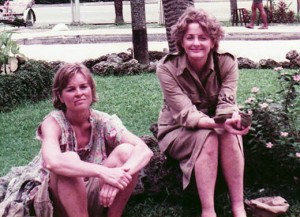 Finally, Elspet’s memory of a visit to Singapore by her husband during filming:

‘One day, Jean, Brian and I went to Newton Circus, had a delicious meal, hired a cab and came back to the hotel. As we got out, Brian suddenly said: ‘Ooh, that’s uncomfortable,’ and he scratched himself. We paid off the cab and Jean and I went into the foyer and Brian followed us in. Suddenly from behind us came the most frightful scream: ‘Arrggh!’ It was Brian, who was now clutching his crotch. He quickly dropped his trousers and out came a very large cockroach! As Brian was so well known for dropping his trousers there were quite a few people who refused to believe this story but it’s absolutely true.’

It was a difficult job for Elspet to join such an established cast, especially as she had a bit of a reputation for being as no-nonsense as Phyllis was, however, last year she also recalled that soon after filming began Veronica Roberts (Dorothy) approached her to make a point of saying “You’re not like that at all. You’re lovely!” Elspet was touched by this and from then on felt part of the team.

Goodbye Elspet and thank you for Phyllis.