The lost graves of Muntok

I’m pleased to point you in the direction of a new comprehensive website covering all aspects of the Palembang and Muntok internees compiled by David Man. Thanks to Judy Balcombe for passing that information on.

Judy also sent on to me a photo (below) of the completed grave at Kampong Menjelang with the plaques with names of the British and Australian internees who died in Muntok (the Dutch graves are now in Jakarta).

Judy Balcombe has written a summary of her recent return to Muntok and Palembang with other relatives of those who died there. They took with them plaques as memorials to the internees and attended the opening of the new Peace Museum at Muntok.

Return to Muntok and Palembang by Judy Balcombe (PDF) 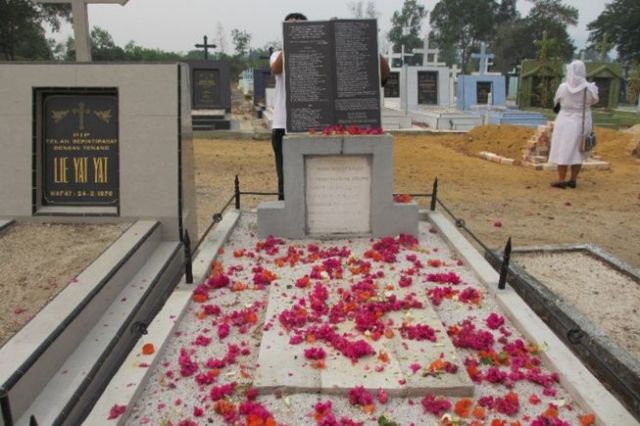 Above: Two large baskets of bougainvillea petals were blessed and sprinkled on the grave at Muntok Town Cemetery.

Read on for the story of The Lost Graves of Muntok

Background information:
Most of the civilian women who died in the Japanese internment camps in Sumatra (and were the inspiration for Lavinia Warner’s Tenko) were reburied  in maintained cemeteries in Jakarta and have headstones that can still be visited today, but this is not the case for the dead of the infamous Muntok camp on Banka Island. After the war they were removed from their shallow graves near the camp and reburied, but in 1960 the Dutch asked the British to move their Muntok cemetery graves so that the Indonesians could use the land for building purposes.

Not in their Royal Charter:
The Commonwealth War Graves Commission elected to rebury the military personnel but left the civilian victims where they were, as it is not in their Royal Charter to move or safeguard civilian graves. In 1980, when a petrol station was built on the site, almost exactly over the part of the cemetery where the British graves had stood, and the remains of the some of the civilian women and men were found, it was assumed by locals that they were military personnel and they were reburied in a shared plot bearing this incorrect description.

Mary Brown’s grave before the cemetery was abandoned

The dead without a memorial:
Amongst those civilian women and men who died at Muntok who still do not have a memorial or individual headstones are Ruth Russell-Roberts, a former model (on whom Lavinia Warner partly based the Tenko character Rose Millar), and Mary Brown the mother of Shelagh Brown (later Lea) who survived the camps and was one of the women whom Warner interviewed and befriended before she put Tenko together. Shelagh sought to redress the matter of her mother’s grave throughout her life. That objective has now been taken up by her daughter Margaret ‘Margie’ Caldicott.

‘Let Us Not Forget‘:
In 1966 Shelagh Lea wrote a piece which eloquently captures how saddened and dismayed she felt at the abandonment of the graves of her mother and her friends whom she lost in the Muntok camp. You can read ‘Let Us Not Forget’ here.

Recent commemoration activity:
See the latest news section above for the efforts of the relatives of the civilian internees and the people of Muntok to ensure that these graves are lost no more.

Memorial Roll:
There follows a memorial roll of those civilian women and men who died in the Muntok camp between 1944 and 1945 whose graves were not moved to Commonwealth War Graves Commission cemeteries. Although their graves were abandoned they will never be forgotten by their descendants.

N.B. The graves of three women – annotated below in red – have recently been found. The fact that they were moved from Muntok after the war proves that ‘cherry-picking’ took place with certain dead considered more worthy of re-burial than others.

42 Responses to The lost graves of Muntok