Posted on September 5, 2013 by Andy Priestner 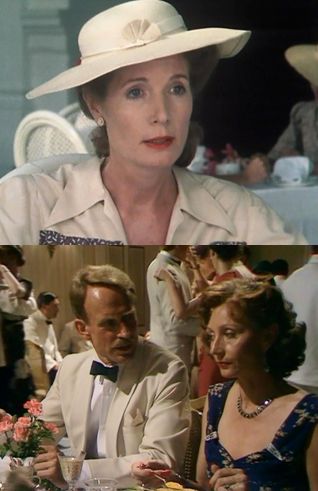 Given that this is the opening instalment of a new drama series, it has a surprisingly strong and confident feel. The series’ dramatic and historical context, the introduction of no less than ten key characters and the foreshadowing of events that are to follow, are all given sufficient screen time and, despite being packed with incident, the episode’s fifty minutes pass in no time at all.

The narrative primarily depicts the very last days of British colonial rule in Singapore and the frightening ignorance of its inhabitants as the Imperial Japanese Army begin their invasion of Malaya. Despite this epic backdrop, Tenko nevertheless sets out its stall as an intimate character-driven drama in thebest BBC traditions. As such, its success will depend on both the quality of the scripting and the performances of the regulars, and on the evidence of this first episode the prospects for the series are very good indeed.

Here, Marion Jefferson, the closest Tenko has to a lead character, begins her long and compelling journey from listless army wife to purposeful outspoken leader. Marion is one of the series’ most sympathetic and likeable characters and this is due in no small part to her sensitive portrayal by Ann Bell. Bell manages to balance Marion’s strong sense of what is right and her drive for purpose with her outward fragility perfectly, wisely choosing to underplay the material rather than hammer the script’s messages home. In narrative terms, Marion provides the viewer with an easy way into the series, as we empathise with her concerns for the evacuated Ben, her disgust with the empty banality of her Singapore lifestyle, and her desperation to make herself useful. When she states that she has ‘no role’ there other than to make the numbers even at dinner, she has no idea of the new role she is set to take on in the coming months, one that will change her life forever.

Playing opposite Bell, Jonathan Newth gives an equally strong performance as Colonel Jefferson. Despite his commanding presence, his frustrated reaction towards the people all around him who fail to recognise that war with Japan is now inevitable ensures that he is another character with whom the audience can identify. We cannot help but support his dressing down of the disorganised Major Sims, or share his pleasure that Bernard’s broadcast has revealed the truth about the island’s paltry defences. We warm to him further when it is made apparent that, despite his typically British exterior, he realises that his wife must go home to their son and is willing to openly tell her that he loves her. The story of the Jeffersons’ marriage will necessarily be put on hold for some considerable time, but when it is examined again in the third series it proves to be just as interesting and authentic as it is here…