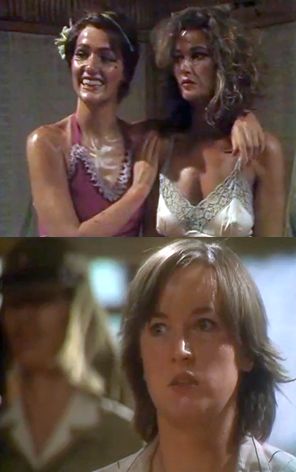 By this halfway point of the first series, it is fair to say that Tenko has comfortably hit its stride. Its central characters and approach are fully established and the only real problem the drama now faces is that the instalments thus far have set the bar, and therefore expectations, very high indeed. However, this episode, in which the near rape of Rose, Blanche and Dorothy and its aftermath are the dramatic focus, is never in any danger of disappointing the viewer, and instead occasionally even exceeds the standards set so far.

The character who unquestionably dominates the episode like an uncontrollable force of nature is Blanche Simmons, played with heart and conviction by Louise Jameson. The actress brings an utterly believable vigour to the loveable cockney and we cannot help but agree with young Debbie when she declares that ‘we couldn’t do without you,’ as Tenko itself would be much the poorer for her absence. The way Blanche is immediately moved to tears by this comment, suggesting that this is one of the nicest things anyone has ever said to her, is both tragic and heartwarming. Blanche’s reaction is all the more moving as it follows her revelation to Debbie at Violet’s graveside that, like Dorothy, she too had a baby once. Despite Debbie’s high opinion of her, for much of the episode several of Blanche’s fellow prisoners – principally Sylvia – call into question her morality, as suspicions are aroused that she may actually be fraternising with the enemy. The narrative is not definitively clear on whether this is actually the case or not; however, the suggestion is that, despite Blanche’s background – there have been strong hints that she was a ‘good-time girl’ before her imprisonment – she has not yet gone with any of the guards. This is implied by: her surprise at seeing Dorothy negotiating just such an assignation; the very real fear she displays as she first realises that the guards plan to rape her, Dorothy and Rose; and the fact that we see her negotiating for more duties with Mrs Van Meyer. Perhaps, as Nellie suggests, it is just that Blanche, like the cockney stereotype, is a hard grafter and is working honestly for the extras she has? On the other hand, her reasoning to Dorothy that she can’t get the interest of the particular guard who may have the quinine they need suggests otherwise. This question aside, what is not up for debate is that, unlike Dorothy, what Blanche gets up to in her free time is not merely for selfish gain. Instead, in this strange topsy-turvy world, such efforts can allow Blanche to play ‘Lady Bountiful’, presumably for the first time in her life, as she hands out the tea and bananas she has earned to her fellow hut-mates. Through such plotting, the levelling effect of imprisonment is further underlined. However, this situation is later cleverly counterpointed by Blanche’s dismayed reaction to Marion’s order that there must be no reprisals against Dorothy, which prompts her to observe that the world’s ‘nobs’ (as she terms the upper classes) have always ‘had it their own way,’ and her consternation that this situation continues to be true even in camp. What is particularly interesting about Blanche is that she is a character of extremes. Although she is capable of great kindness – being altruistically motivated by her affection for Debbie to attempt to secure the quinine to save Judith, putting herself in very real danger in the process – she is also prepared to mete out an uncompromisingly severe punishment to Dorothy for her lies. Might she actually have drowned Dorothy if Marion had not intervened? The episode’s closing scenes further emphasise the less palatable side of her nature, as we witness her disturbingly serious threat to Dorothy (‘If you so much as put one foot wrong, I’ll make the Nips look like a bunch of Florence Nightingales’), followed by her obvious delight that the guards who sought to rape them are being sent away from the camp, perhaps to be fatally punished (‘With any luck they’ll all be shot’). Such scenes ensure that Blanche is not merely portrayed as a rather clichéd ‘tart with a heart’, but also as a much more interesting, damaged and potentially violent individual.

One of the most fascinating and underplayed elements of the episode is the question of the cost of survival. During a beautifully constructed scene by the entrance to Hut 1 – which is backed by the melancholic, almost mournful, sound of the women singing – Marion describes to Sylvia how lately she has felt as though her ‘whole life is being unpicked, stitch by painful stitch.’…