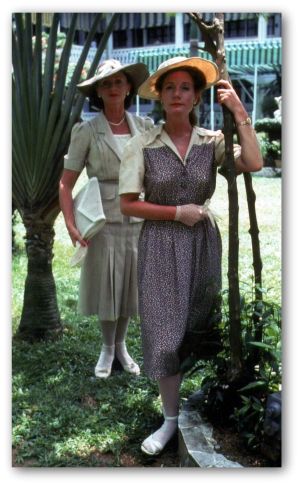 5 December 1941. British Colonel’s wife Marion Jefferson is convinced that her existence in Singapore – an endless round of shopping and dinner dances – is a pointless one. She confides in her long-term friend Vicky that she has decided to return to England to be with her son Ben. Colonel Clifford Jefferson inspects a British command post in the jungle to see if they are capable of withstanding a possible attack by the Japanese. He is dismayed and angered by what he sees and dresses down the Major posted there. Sister Ulrica arrives in Singapore determined to retrieve monies owed to the St Thérèse mission. She refuses to either accept or listen to the excuses of Father Lim and elects to wait in the abbey cloisters until her request is satisfied. Journalist Bernard Webster is increasingly concerned by the population of Singapore’s lack of awareness of a potential Japanese invasion. His beautiful, if self-obsessed, partner Rose Millar, suggests that he broadcast what he knows on his live radio show. British officer Simon Treves is entranced by a Eurasian girl called Christina Campbell who agrees to give him a tour of Singapore. Thanks to her fellow nurse and friend Nellie Keene, Kate Norris receives permission from her uptight superior, Dr Beatrice Mason, to attend a dinner dance with her partner Tom Redburn. At the same event Clifford relates to Marion, Vicky, and her husband Jack, his concerns about the gradual disappearance of the island’s Japanese population. Bernard gives his live radio broadcast and reveals the poor state of the island’s defences before he is forcibly taken off air. Kate and Tom become engaged and spend the night together in a hotel. That same night Clifford receives word that the Japanese have landed on one of the island’s peninsulas, shortly before several Japanese aircraft bomb the city. Beatrice Mason and her nurses are kept busy treating the many injured and are aided by the arrival of a group of nuns led by Sister Ulrica. Clifford and Marion hear that the Japanese have attacked Pearl Harbour. The Colonel is convinced that the British will not win the war and tells Marion that she must leave, however, she now intends to stay.