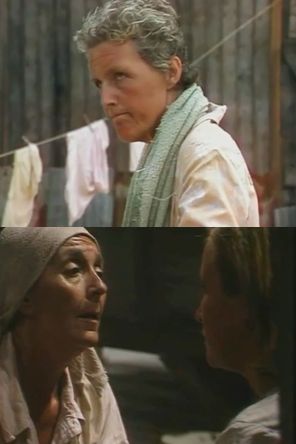 This instalment not only deals with the repercussions arising from Sally’s tragic suicide, but also the fallout from the actions of two other characters: Sister Ulrica’s decision to preside over Sally’s funeral, despite the fact that the girl took her own life; and Dorothy’s sexual relations with the guards. The episode’s other main focus is on Beatrice, as we have the opportunity to observe her off-duty persona for the first time through some affectionate and intelligently scripted scenes. As usual, the episode is a strong ensemble piece, however both Patricia Lawrence and Stephanie Cole give particularly notable performances as they continue to breathe truly authentic life into their respective characters.

Religion, or rather religious belief is the main theme of the episode, with the concept of Christian morality carefully explored into the bargain. Despite the penance endured by Sister Ulrica and a conspiracy that has Sally labelled as mad (so that, as Beatrice puts it, she can be ‘tidied away into consecrated ground’), Anne Valery’s sophisticated script resists forwarding an atheistic agenda. Instead the narrative eloquently speaks of a middle ground, of a more humanistic faith that Sister Ulrica has been feeling her way towards since the series began. Ulrica began Tenko as a staunch and resolute nun who seemed formidably and immovably certain of both her faith and her moral duty. However, over the course of the series, her captivity has forced her to re-examine her beliefs and, through friendships with her fellow internees, reconnect with the secular world that she has been separated from for most of her life. In the first half of this episode, despite the fact that she has dysentery and is very tired due to her decision to share in the punishment meted out to her friends, she relates that in her heart she feels good. She even admits to Beatrice that she thinks she and her are very alike, despite the fact that she does not share her faith. Later, when she discovers that her dress has been cleaned ahead of the priest’s visit, she tells Dorothy that she has known much kindness since her capture: ‘So much goodness out of evil, it has been a revelation.’ Such experiences are clearly prompting Ulrica to question the nature of her religious beliefs. When Daisy simplistically declares that her own faith helps her to distinguish between ‘what’s good and what’s bad and how to behave,’ Ulrica tells her: ‘I admire your certainty,’ and observes that: ‘Sometimes, my dear Daisy, there is a choice between good and good’ – in other words, a take on religion that is much less black and white, an interpretation that she is finding far more appropriate in her current circumstances. It is no accident that the narrative is crafted in such a way that Ulrica reaches this new threshold of (what at least she regards to be) enlightenment just prior to her first confession in captivity, an experience which she expects to make her feel lighter but which will in actual fact give her a heavier burden to carry.

During her confession to the visiting priest, Ulrica reveals, as has been suggested in previous scenes, that she now doubts that she has taken the right path in life as it has kept her separated from those ‘less fortunate’ than herself. While the priest does not castigate her for this, merely stating that: ‘All God’s work is to the glory of God,’ when he hears that she presided at Sally’s Christian funeral despite the fact that the girl was not mad when she committed suicide, he rejects out of hand her entirely reasonable and compassionate defence. The priest’s view of religious morality is clearly no more sophisticated than Daisy’s as he seeks to ensure the nun’s rededication by devising a cruel penance that not only ignores the value of her connection with her fellow captives, but actively forbids it. That the priest clearly believes that the women have not helped her towards what is evidently a new and entirely appropriate understanding of the world and her faith and instead have taken her away from her calling is a sad indictment of his narrow approach and lack of humanity. That he also feels the need to fatalistically charge her to be obedient to the Japanese (‘those whom God has chosen to direct you’) is similarly abhorrent. Ulrica’s penance of silence and her attempts to redeem herself through further self-imposed hardships (no shoes, no mattress) do not present Catholic faith – or at least the priest’s and Sister Ulrica’s conventional understanding of it – in a good light. Her suffering helps no-one, in fact the narrative structure cleverly ensures that it makes Ulrica unavailable at a time when one of her friends, the pregnant – and therefore understandably desperate – Dorothy, needs her the most. Although it is clear that there will be further repercussions when Ulrica ultimately breaks her vow of silence in order to connect with Dorothy, it is nevertheless a triumphant and significant victory of the nun’s compassion over her conception of sin, the same emotion that motivated her to preside at Sally’s funeral…