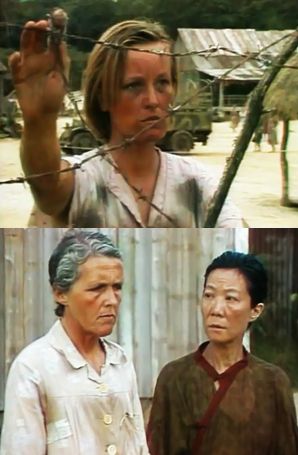 Very few episodes of Tenko focus almost solely upon one single storyline, but when they do they invariably stand out as among the strongest and most memorable of the series. This episode, which concentrates on Dorothy’s pregnancy and her subsequent abortion, is no exception.

The first half of the episode principally deals with the unimaginably horrendous predicament of Dorothy desperately wanting an abortion (due to: the baby’s parentage; the uncertainty as to how the Japanese will react; and the fates that befell both Violet and Eleanor) but having no conceivable way of making this happen. Despite the fact that, initially at least, the abortion seems impossible, she also has to endure being repeatedly remonstrated with for being set on this course of action. It is little wonder therefore that Dorothy begins to consider suicide herself, resolutely stating to Ulrica: ‘It’s just a choice between one death or two.’

The reactions of her friends to the dilemma are illuminating. Ulrica’s belief in the sanctity of life is no surprise given her faith, but on this occasion Kate’s take on the matter is far more hardline than the nun’s. However, it is clear that the nurse’s viewpoint derives as much from her devotion to the Hippocratic Oath as from her faith. This fact is borne out by her questioning of: Beatrice’s medical ethics when the doctor admits that she would perform the deed under suitable medical conditions (‘But you’re a doctor!’); and Dr Trier as to how seriously she took the Oath. To Kate, abortion is pure and simple murder, and this equally simple conviction clearly blinds her to the possibility that the Japanese might not let the baby and/or Dorothy live if they were to find out. She states that: ‘The Japs love babies,’ neglecting the rather important detail that, unlike Sally’s, this baby is the result of a forbidden union between a guard and a prisoner. Kate’s response to Trier’s typically anodyne comment (that no-one would take an oath unless they meant it) is: ‘I like to know where I am.’ It is a phrase that speaks volumes about Kate’s naïve desire for a black-and-white world in which there are hard and fast rules for her to live her life by. Any sympathy we may have had for Kate right at the start of the episode when she revealed to Beatrice that she had ‘always been the outsider, jogging along, a happy-go-lucky colonial who’s none too sensitive,’ evaporates precisely because of the lack of sensitivity she displays here both for Dorothy’s predicament or for the views of her friends. It is interesting to note that not so long ago it seemed that Beatrice inhabited this world of apparent certainties too, but, as we have seen over the course of the series, the doctor’s outlook has since shifted in light of her internment and its many challenges and she is now a more well-rounded and flexible individual who is much less certain of the value of absolute beliefs. This fact is summed up here by her response to Kate: ‘We live and learn.’ In essence, on this occasion, Beatrice feels that it is far more important to put Dorothy’s wellbeing before medical ethics or her own feelings on the matter.

Although Ulrica no doubt considers abortion to be a mortal sin, as evidenced by her significant decision in the previous episode to break her vow of silence in order to speak out against its possibility, her interactions with Dorothy here are more supportive than they are critical. Having said that, it is easy to understand why Dorothy finds her initially silent physical presence rather more claustrophobic than comforting. When the pair do come together to discuss the situation for a second time in the washhouse – in a scene that is just as heated and emotional as their first meeting there – rather than reprimanding her for a potential sin, Ulrica stresses that: Dorothy is more important to her than her penance; that life is longer than she imagines; and that God will give her strength. Despite her well-chosen words it is obvious that Ulrica is fighting a losing battle, especially as Dorothy is beside herself emotionally. Nevertheless, when the nun later admits defeat, by which time an abortion has become an option, rather than condemning Dorothy, she asks that the women: ‘support this poor child in her hour of need, whatever our personal feelings.’ This compassionate and very human stance promises to have serious repercussions for Ulrica when the priest returns, and offers a further opportunity for the series to examine the themes of religious morality and absolute belief.

It is a measure of Tenko’s sophistication that Dorothy’s unlikely saviour in this impossible situation is none other than Verna. Scheming and manipulative she may be, but she is nevertheless precisely the right person to facilitate the abortion…