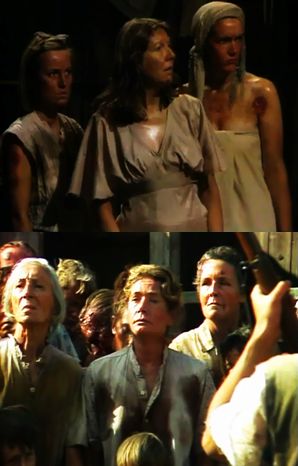 Given that it is the finale of the second series, this tenth episode begins in relatively inconsequential fashion as day-to-day inanities of camp life come to the fore, such as petty thieving (biscuits and looking glasses), hospital visits, dirty drains and Joss’s latest plans for ‘nipping the Nips.’ Thankfully the narrative heats up in its second half, as the corrupt administration plotline, which has dominated the second series, finally reaches its conclusion and Verna and Miss Hasan are set to receive a comeuppance which promises to be cathartic to loyal viewers. However, it is an Allied plane which brings the series to a thoroughly unexpected cliffhanger; an ending which is all the more surprising when one considers that this could easily have been the very last Tenko episode of them all.

Set in September 1943, some 20 months into the women’s captivity, one of the main concerns of the narrative is to illustrate how conditions within the camp have deteriorated. Beatrice and Kate are overrun with patients in the hospital (‘They’ll be hanging from the rafters next’) and there is a new quota for admissions. Due to the fact that more of the women are working at the factory, the compound is looking more rundown and the drains are filthy. Even the guards’ uniforms are more ragged and dishevelled. However, it is the sight of the previously immaculate Verna with sores on her face and lank, unwashed hair which really drives the message home that things are not what they were.

As a consequence of these reduced circumstances, the mood in camp is very black indeed and it seems that the captors are just as miserable as the prisoners, regularly acting out a ‘pecking order’ of misery (as described by Joss to Mrs Van Meyer): ‘Yamauchi demands more production, takes it out on Sato, who takes it out on Hasan, who takes it out on Verna, who’s foul to everyone!’ A dirty drain provides the perfect opportunity to illustrate this chain which ultimately sees the women’s self-serving leader bear the brunt of Miss Hasan’s fury.

Although she continues to enjoy the luxury of stuffing her face full of chocolates, Miss Hasan still spends the majority of the episode in a state of incandescent rage. There is some not inconsiderable pleasure to be had in witnessing her bad temper as it transpires that she (accurately) traces the point at which the camp started to fall apart back to the arrival of Marion and the other women from the first camp. It is deeply satisfying to know that the new intake have caused her so much trouble, despite their status as mere prisoners. That she despises Marion particularly – ‘But then I’ve always mistrusted women like Mrs Jefferson. With her ‘oh so polite’ manner’ – vindicates our belief in her as the women’s rightful leader. Despite the fact that Marion has had no official status in this second camp she has still demanded the attention of her captors and gamely fought for the rights of her fellow prisoners. Verna’s reaction to Miss Hasan’s observation that, in Marion’s case, pride will come before a fall: ‘Not always,’ suggests that she, at least, has accepted that Marion is a force to be reckoned with. Of course, by the episode’s end, Marion proves Verna right by finally succeeding in discrediting her.

As Verna’s downfall has been so long in coming, its dramatisation is all the more gratifying. It is no accident that throughout the episode the store cupboard key sits more visibly around her neck, nor that her fingers fitfully play with it, as the question of the missing Red Cross parcels looms ever larger. However, before we get to the point at which Verna is forced to account for her crimes in front of the women she has wronged, we are party to yet more evidence of her selfishness. Her treatment of Daisy here is particularly abominable given just how afflicted the girl is with terrible blisters all over her hands. Verna shows no sympathy whatsoever for her terrible predicament, just obvious disgust. And to make matters worse, she even has the audacity to tell Daisy, while sat stroking Pudding, that she is having to work ‘more than most’ these days. Worse still, even if Daisy was physically able to clean Verna’s room to the required standard, she has no means of paying her. As Miss Hasan is demanding immediate payment of the money she is owed, Verna effectively has Daisy working for nothing. When Verna later gets it in the neck after Daisy fails to post up a new rota, she ruthlessly lays into the girl, actively seeking to destroy any comfort she might have derived from her association with the women in Marion’s hut: ‘Like you? They’re just using you! Only you’re too stupid to see it. Too bloody stupid!’ When Daisy reacts, as well she might, by smashing a china cup, Verna turns the situation, as always, to her advantage, stating that it is now she who owes her money.

One of Verna’s other scenes with Daisy offers a further insight into her callous approach to the women in her care. When, after a sudden search, the women’s precious few possessions are removed and burnt, including Marion’s diary, she brightly declares: ‘One thing about the burning of their bits and bobs, I should be able to sell some of my stuff.’ We later learn that this isn’t the half of it and that she actually instigated this and all the previous searches, on this occasion organising the search precisely to ensure that her forthcoming sale of goods would be more profitable…