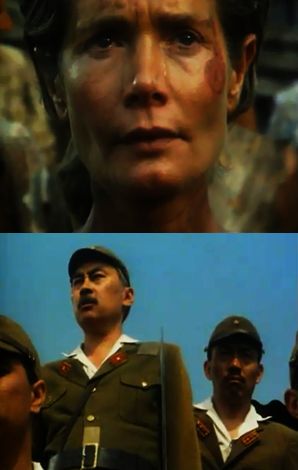 The third series opens with an episode which initially seeks to document the ongoing day-to-day captivity of the women now that they have been interned for almost three-and-a-half years. However, the emphasis suddenly shifts halfway through to the question of the women’s immediate survival as the narrative builds towards a nail-biting last tenko at which they ready themselves to fight for their lives. Instead the women are to discover that the war is over and long-term viewers are finally rewarded for their loyalty as the prisoners celebrate and Marion takes charge of the situation. The direction, scripts and performances are accomplished as ever, with Ann Bell and Stephanie Cole in particularly fine form. However, it is not all plain sailing as several elements arguably detract from this opening instalment.

Most unfortunate of all is the discovery that the much-loved Blanche, who was always played with such vigour and charm by Louise Jameson, is no longer part of the action. Worse still, we learn of her death courtesy of a quick camera sweep across the camp’s burgeoning graveyard. It is hard not to feel cheated by the abrupt way in which Blanche has been written out of the series, simply because she was such a big character who viewers had come to invest in emotionally. However, her absence from this third series may well hit the new DVD audience harder than it did the audience of 1984, as for the former, who do not have to wait two years between series, it is only a matter of two episodes ago that the equally colourful Rose was killed off. At least in Rose’s case there was a carefully handled on-screen exit. Of course, Blanche’s absence and the need for her off-screen death (due to Jameson’s unavailability) was beyond the production team’s control. Her absence is made harder to bear especially as it is fairly obvious that her persona and storyline has been transferred to the character of Maggie Thorpe. Thankfully, Lizzie Mickery, who plays Maggie, is a fine actress who takes on the role with appropriate gusto. Maggie’s response to Edna’s wish that Alice has a happy birthday (‘Fat chance!’), her exaggerated conducting of the women as they sing a birthday chorus, and her sudden decision to go after Sato (‘Oh no you don’t!’) are all very ‘Blanche’. Fortunately, as the series progresses, Mickery and the writers succeed in establishing Maggie as a character in her own right, but it has to be said that in these early episodes it takes some time for her to shake off the spectre of the outspoken Londoner.

The discovery that Verna, Daisy and Suzy have died as well is also disappointing. In Daisy’s case this is no real surprise given that she received such extensive injuries in the series two finale, while in Verna’s it was probably felt that her storyline had run its course. Cindy Shelley makes a strong start as reserved Alice who has spent all of her adolescence in the camps, achieving a believably gauche and naïve demeanour for the formerly privileged teenager. Comparing Alice with the mentally-challenged Daisy and the much younger Suzy, it is easy to see why she was introduced instead. Alice was set to be a more straightforward player in the unfolding story than Daisy would have been, and the sexual naivety storyline would have been unsuitable for the much younger Suzy.

Changes of personnel aside, the sheer amount of time that has passed since the end of series two is also a jarring factor. Over the first two series we followed the women’s first 18 months in captivity, from February 1942 to September 1943, but here we are suddenly forced to accept that we have missed almost two more years of their internment (unfortunately Joss’s dialogue about the women having spent over two years in this third camp cannot be correct as the Area Three camp was bombed only twenty months previously). Although there is no question that the gap in the action engenders a feeling that we as viewers are ‘late to the party’, it is nevertheless eminently sensible that the third series fast forwards to the war’s end here, as it would have been difficult, misguided even, to attempt to wring original drama out of yet more episodes set in the camps. By choosing to move beyond captivity and follow the women as they come to terms with their freedom and seek to rebuild their shattered lives, Tenko is about to enter new, and exceedingly rich, dramatic territory which will more than make up for the gap between series. However, before the narrative can go off in this new direction, it must first wrap up the story of their internment and it does so admirably.

It is almost impossible to imagine the women enduring even more time as prisoners than we have already witnessed over the first two series, but the early part of the episode gives at least a flavour of the privations they have experienced since the bombing of the second camp in 1943. The morale of the women is clearly much lower for a start, indeed only Joss and Kate seem to be able to put a positive spin on anything. In the former’s case, Marion remarks that she’d ‘see good signs in a teacup full of maggots,’ while Mrs Van Meyer counters Kate’s belief that: ‘When God shuts a door, he always opens a window,’ with the pessimistic rejoinder: ‘And puts bars across it!’…