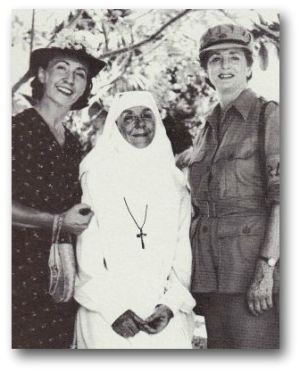 Christina witnesses Joss and her uncle being bundled on to a police lorry and runs to the Centre to tell Stephen. Joss is interrogated. Beatrice is furious when she learns that Phyllis doesn’t consider her ready to give evidence. She elects to immediately present the facts to Smithers, but finds herself unable to control herself as she does so. When Mrs Van Meyer discovers she has drawn up to her limit from the bank she pawns her wedding ring. Joss recovers from her ordeal at the abbey. Sister Ulrica confides that she is still struggling  with the vow of obedience. Joss decides to demand an article of the Straits Times. Beatrice tells Ulrica about her outburst. Marion and Clifford cross swords over Ben and their marriage. Clifford tells her that Yamauchi is in Singapore. Joss tells Beatrice about a Dutch newspaper interview with Mrs Van Meyer which is full of lies about her interment. Phyllis learns of Joss’s run in with the police and asks her if she will go home. A furious Beatrice confronts Van Meyer about the truth of her time with them in the camps. Maggie tells Smithers about Blanche’s death in the punishment hut. Marion arrives at Raffles and tells everyone that Yamauchi is in Singapore. Christina defends him and angrily talks about her uncle and the lot of the Chinese people. Marion and Clifford argue over the fact that she has elected not to give evidence. Christina’s request to visit Yamauchi is granted and she visits him in Changi. Mrs Van Meyer tells Joss that she has pawned her wedding ring. Maggie and Jake go to bed together and afterwards share details of their respective pasts.  Beatrice decides to call a halt to giving Van Meyer the silent treatment. Sister Ulrica ventures out to Raffles and meets the other women in the bar. They discuss Yamauchi’s presence in Singapore and Christina reveals she has visited him. The conversation turns to her uncle who has been imprisoned for collaboration. When asked about her cousin, Christina reveals that he was executed by the Japanese at just seventeen for smuggling rice into Changi for British prisoners of war.